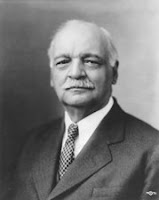 Barack Obama is not the first partially non-European American to achieve an executive office position in American government. That distinction belongs to Charles Curtis who was the 31st Vice President of the United States (under Herbert Hoover) and a member of the native-American Kaw nation. It is of interest that, like President Obama, Curtis was raised by his grandparents. Perhaps of more interest, at least to constitutional scholars, should be that fact that Curtis was not born in the United States, but rather in the Kansas Territory prior to statehood. If anyone can explain why this did not present an obstacle to his election, please post the details.
Posted by The Snarkmeister at 12:43 PM