The Bush Administration accomplished a phenomenal piece of government investigating at a record pace. Never before in the annals of flight accident investigation history has a case been closed so quickly. The very last thing President Bush did, as he left the White House, was to leave a classified report on the cause of the U.S. Air Flight 1549 accident laying on the president's desk for Barack Obama's attention. The report is classified, but the Snarkmeister has been able to obtain a copy. In the interest of the public's right to know, he is disclosing it today, at great personal risk. The Bush administration, of course, concluded that the accident was caused by terrorists. The photographic evidence is a bit grainy, but unlike with the weapons of mass destruction, their proof this time appears incontrovertible: 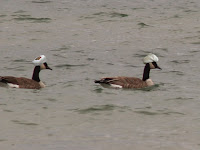 U.S. Air Flight 1549 was brought down by radical Islamic geese, likely owned, trained, and smuggled into the country by Osama bin Laden. Supporting this conclusion is the fact that small bit of turban were found in the remains of both engines.

Posted by The Snarkmeister at 1:27 AM